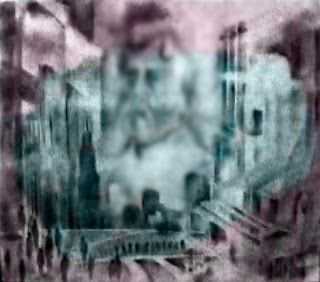 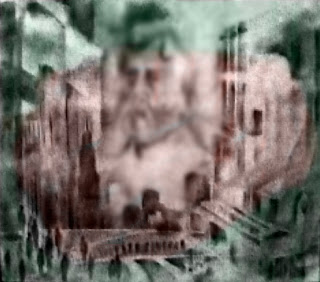 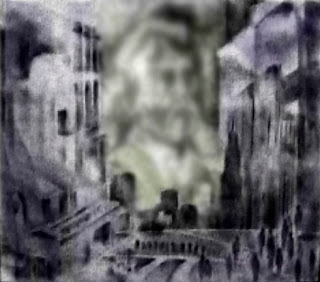 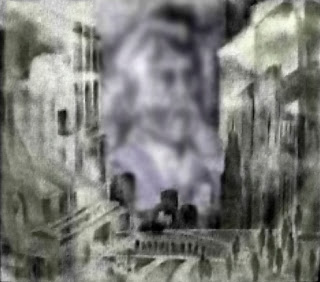 Posted by wisesigh at 10:54 AM No comments:
Labels: Incubator, PicADay, W.I.P.

Here is an interesting article on converting between color and sound:

a color blind artist uses a machine that identifies the color spectrum by associating the color's light wavelength with an equivalent sound wavelength; the artist hears the sound and identifies it with a color.

One wonders what shifts in perception a non-color blind artist would experience with such a machine that was out of sync ... hear blue and see green ... a headache?(probably). Would the visual input override the aural input? or would the aural and visual color input blend in the brain to a combined output color? I don't know enough about how color is processed in the brain, but it does remind me of the a small group of people who can see colors when they hear sounds -- synesthetic perceptions.
Posted by wisesigh at 1:58 PM No comments:
Labels: art = Art?

Something easy to make with the kids -- an old optical toy, called a thaumatrope, blurs two images into one. It and other historical optical toys can be found on the this website.
Posted by wisesigh at 12:06 PM No comments:
Labels: art = Art?

We are so used to Powerpoint, etc., and digital projectors, it's quaint to think about using old fashioned slide projectors and transparency projectors. Here's something even quainter: I ran across Magic Lanterns today when I was looking for information on the Burnham Plan. Magic Lanterns are a precursor to slide projectors -- individually painted glass slides (later photo positives on glass) were projected with a light source, enlarging lens, and crank to create an animation.
Posted by wisesigh at 11:14 PM No comments:
Labels: art = Art? 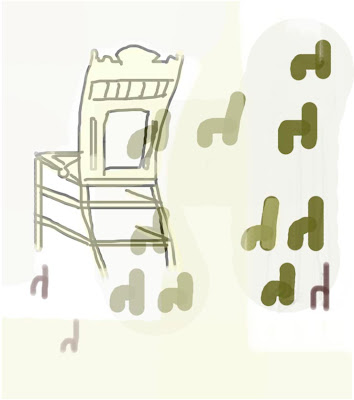 I sat in for a short while to observe a grants panel (open to the public) to watch the selection process, hoping it would shed light on the proposal process. Because the particular process is designed to provide meaningful feedback to the submitting artists, there was extensive and in depth discussion of each artist's work, which was nice. I suspect not all jury panels have this level of organized discussion.

While the conclusions I came away with are not new, they are very good reminders:

(1) Cohesiveness or coherence between all the submitted images matters; unexplained (via the artist statement) incongruities detracted from the work and the proposal.

(2) Coherence between the work and the proposal matters -- extensions of the work ought to appear natural or, if not, then ought to be well explained.

(3) The budget for the requested funds needs to match the proposed project. Really, coherence across the proposal matters.

(4) The work and from the proposal need to leave the impression that the artist can accomplish the proposed work -- a potential issue for an artist seeking funds to branch out into a new field.

(6) Jurors do disagree.
Posted by wisesigh at 4:21 PM No comments:
Labels: art practice

I find myself currently pursuing forks. I have several projects at the moment: one returns to canvas (retreat? or grounding?); another pushes digital exploration (extension?); and three play with new materials and not as ancient icons (divergence?).

When the work widens, it is harder to speak about artistic approach and intention with singularity. Resorting to "exploration" as a general descriptor seems superficial. Each project relays the soul and states of being; cycles of life, death, and renewal remain critical. The generalities, then, still apply. The specifics change. Coherence among the specifics would seem key to a statement of purpose.
Posted by wisesigh at 10:33 PM No comments:
Labels: art = Art?, art practice

These are valid questions in the making of the work and in what seems to have become the expected post-creation speak about the work, but ultimately a strong image should stand alone without explanation.

I would not say the viewer has to take away an exact intention from the artist; it's more fluid. I'm often amazed at what engages, at what viewers pick up from images, intended or not. Hopefully, the image draws the viewer in and from there engenders inspection, reaction, thought, feelings, dialogue. Hopefully, it's layered. Hopefully, they walk way remembering it, mulling it over, then and days, months later. Hopefully, they feel the need to see the image again, and again, and it reveals more each time.

Not an exact message, unless it's astoundingly succinct and resonant. Most efforts at exact messages are flat and hollow. I don't believe the curator was suggesting an exact message to be intended and communicated, but rather something more universal and concrete than the individual experiences of the maker, or something that is pushed and honed to the point of becoming universal out of the individual (iconic). We target both: our individual perceptions frame what we see as universal, our beliefs about universal truths bias our perceptions.
Posted by wisesigh at 10:59 AM No comments:
Labels: art = Art?, art practice

Today's conundrum: framing one's work in discussion, or the dreaded artist statement, a work always in progress ... without sounding pretentious.

My favorite statements about my work are the brief ones: "At the core, my art is about life, death and renewal" and "Before we begin to share thoughts, we exist and observe within our own minds: the conscious mind is not dispensable." But brevity doesn't always satisfy the person asking for a better understanding of the artist's approach to art and the artist's intentions in the work.

The detail is where I hit roadblocks. Do I talk about the conceptual framework in which I frame my narratives? I've narrowed that down at the moment to "carrying icons of the past into the present," and if asked, a discussion of particular icons. Do I talk about the formal framework in which I frame my narratives? I've narrowed this down to "drawing based physical and/or virtual installation or arrangement of mutable elements constructed seeing and making marks on shifting planes..." and digressing from there into more specifics about temporary verses permanent, static verses moving -- with the intention of vacillating in the in-between..." Yes, gets wordy -- a problem I have. Both are relevant since my processes themselves are part of the narrative: my methods track life into death into renewal). It seems to get too complicated and involved, easy to tell when the person I am talking to rolls their eyes or begs me to slow down.
Posted by wisesigh at 11:18 AM No comments:
Labels: art practice 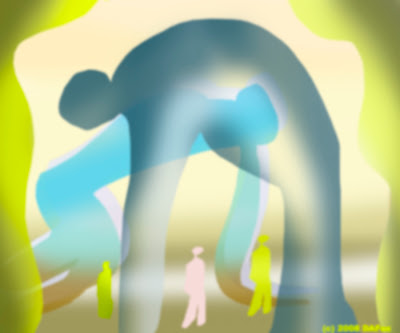 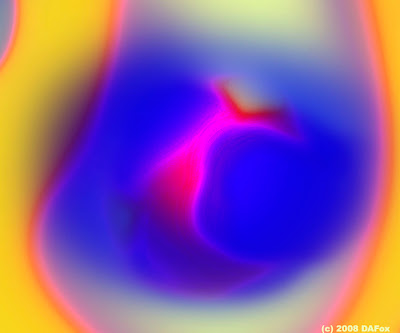 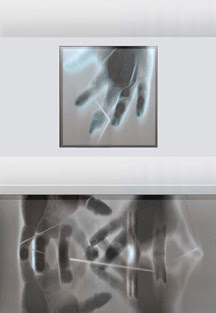 The Hand project is progressing. I am applying for a residency that will give me access to better equipment.
Posted by wisesigh at 10:14 AM No comments:
Labels: Incubator 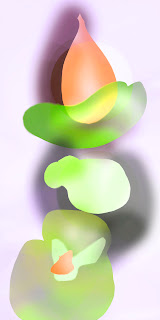 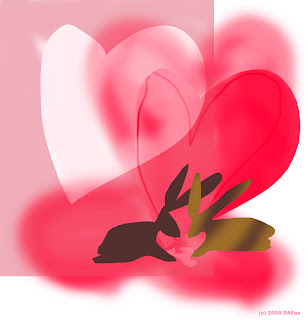 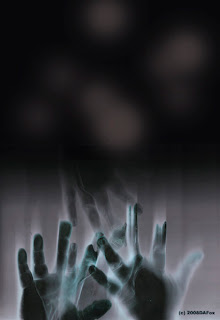 I was inspired today, at random, by an errant idea of writing on my hand like I did when I was much younger. This led me to think again about the hand and creativity, going back to hand prints in rock art, and to work on integrating this iconic connection with my digital explorations. I still am working out some technical issues as well.
Posted by wisesigh at 11:54 PM No comments:
Labels: Incubator, PicADay
Newer Posts Older Posts Home
Subscribe to: Posts (Atom)