There's little point in giving examples of the first two, but for me, the chord was struck the first time I saw Cai Guo-Qiang's gunpowder drawings at the Hirshorn . I stared at them for a long time ... when I turned around, my friends already had moved on to another room, impatient with me. The gunpowder drawings were perfectly on the line between abstraction and representation. I saw Cai-Gio-Qiang's recent installation at the Whitney ... unfortunately, it was overload, which lessened the impact of both the individual drawings and the stuffed animal natural history museum reminiscent installations.

I revisited (online) Art 21's interview with Richard Tuttle. I was surprised, and refreshed, to realize that his thinking on drawing, particularly about the border between drawing and sculpture and the notion that the 2D plane is more real than 3D, paralleled my thought process independent of reading his views.
Posted by wisesigh at 12:22 PM No comments:
Labels: art = Art?, art practice 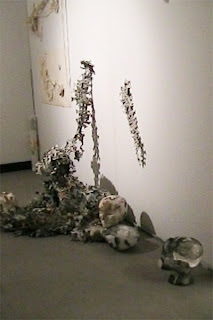 Another one of my pieces, What Comes of This, was selected for the front page viewer on myartspace.

I've loaded new images there, and also to my artreview.com page.
Posted by wisesigh at 5:53 PM No comments:
Labels: Now showing

I was reminded again last night how different a projection looks from the image on a computer.

I attended an artist salon sponsored by the Chicago Artist Coalition at Hyde Park Art Center The difference between the color of the images as seen on the monitor and the color as seen on the projection was image-altering for much of the artwork. The projected images were significantly fainter. The detailed line work of one artist almost completely dissappeared in the projection.

This matters even if one is not a projection based artist because juries often project the images as they jury them. Images need to hold up to projection, yet another difficulty for works that play on subtle shifts that don't easily carry over, if at all, into jpegs in the first place. It's a problem, too, for color relationship work, as color calibration of the systems used by any given jury is not in the artist's hand. Images also need to hold up as small jpegs on a website screen. Often, one can't email larger files, and the dpi that shows online is low.

One wonders if visual subtleness, at least in the lowest range, will disappear from art entirely as we proceed in our digital age. Meanwhile, tools have long helped us "see" what the naked eye cannot perceive, for example infrared ranges or the inner workings of the brain through MRI and CATscans, and will continue to do so.
Posted by wisesigh at 5:30 PM No comments:
Labels: art = Art?, art practice

The power of art lies in alchemy, I think. Not some new age turn lead into gold nonsense or magical chemical notion or magic. But rather, the simple idea that transformation is possible, the taking of one thing or set of things and the making of another out of it. Art materializes this, reflects it, sometimes engenders it.

Part of the problem of irony in art is that, after the irony, there often is nothing there. Hitting a dull note, or even the perfect tone that rapidly loses sound. Often enough, the irony itself escapes the viewer: the work then is soundless. I'm tired of irony.
Posted by wisesigh at 4:16 PM No comments:
Labels: art = Art?, art practice

Article On Women, Art and Gender

An interesting article by Jeannie Shubitz, Woman, Art and Gender: A History:

"An old New Yorker cartoon depicts a group of prehistoric women painting images on the wall of a cave. One of the women suddenly pauses in her work and asks: “Does it strike anyone as weird that none of the great painters have ever been men?” (Heller, 1987) This, of course is a parody of the long-held assumption that all prehistoric art was created by men. Why should we assume this, when we don’t even know why this art was created, much less by whom? It is because for many centuries, we have been taught that all great art was the product of men, and that art created by women was merely an attempt to copy the masters that came before."

Click the title above to read the rest. Good points about some faulty assumptions and the difficulty female artists face having artistic identity that is not gender linked.
Posted by wisesigh at 9:48 PM No comments:
Labels: art = Art?
Newer Posts Older Posts Home
Subscribe to: Posts (Atom)