Incubator entries contain some of my germinating concepts that will work their way to full blown artistic expression over time.

My mother died recently after years of chronic illness. The memories of her that come to mind overall are good and amusing ones even though there was at times considerable distance between us, and at one time, resentments that over the years faded away. Some papers she left behind show her caring and her own trials. This has me thinking about memories and rememberances.

I will be remembered as … even our own day-to-day, year-to-year memories are fleeting, sometimes dead wrong. Does it matter how we are remembered; if so, why? One idea is generational -- how we are remembered impacts our family, perhaps our friends. Another idea is divinity -- we'll be judged later. A third idea is our highest and best purpose -- does the way we are remembered serve to achieve our purpose (even if we are unsure the purpose)? We pass the world onto others.
Posted by wisesigh at 1:18 PM No comments:
Labels: Incubator 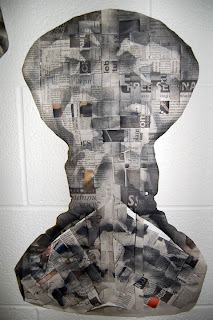 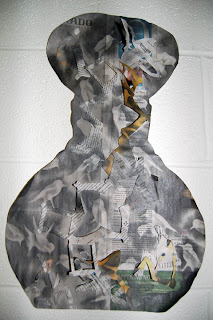 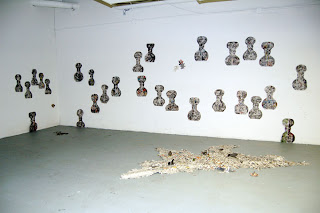 Here's are close-up shots of a couple of the figurative elements for The Open Studio Project, Vessels with Souls, and an installation shot. The project has been extended by the city into December. I am now working on other constructions with the newspaper, without consideration for graphite or pigment surface imagery.

The graphite pulled the repeated Vessel figurative shapes together and engaged the dynamic I was after: at a distance, each shape appears dark and singular, but on closer inspection, both the newspaper layers and the graphite imagery layer reveal themselves. As my thinking progressed with each shape, I became more interested in using the woven paper to add quasi three dimensionality to the pieces; at the same time, I also became more interested in using the graphite to obscure as well as to accent when integrating the graphite imagery into the newspaper elements.

The butterfly was a bit of a surprise, beginning as a meditative exercise in interlocking pieces and growing organically into a form. At one point, I could see it as a shroud growing to fill the the expanse of the room, and yet, since Vessels has representational content, I felt a deep need to maintain a representational aspect to the developing form; hence, the form felt complete when it reached this stage. It can go on the wall and be suspended from the ceiling, as well as lay across the floor or other forms, taking on the shape from whatever supports it is given. I see many dimensional possibilities, which I am beginning to explore. How form possibilities engage a concept remains crucial. I plan to engage the expansive room shroud idea in some manner, letting it run its course without the confines of the larger installation concept, at a later date.
Posted by wisesigh at 2:59 PM No comments:
Labels: art = Art?, Installation, Now showing, Think Shape
Newer Posts Older Posts Home
Subscribe to: Posts (Atom)