I ran across You Tube videos of a tech walk through of Denver Art Museum (Hamilton Building designed by Libeskind). It's a very sharp, jagged looking building on the outside and has many leaning walls and non rectangular orientations in the interior.

What struck me is how dominant the architectural space is: it's art itself that the viewer gets to actually walk around inside the art, and from the video, it's hard for me to imagine the art pieces shown in the museum can be experienced for their own identity without being overshadowed by being within the space. This felt true even with the projections and tech things that were meant to work with the orientation, etc., of the space. Maybe it's different in person, where the scale is actually experienced rather than watching and trying to imagine it from a small rectangular box.
Posted by wisesigh at 11:32 PM No comments: Links to this post
Labels: art = Art?, Presentation Context, Think Shape 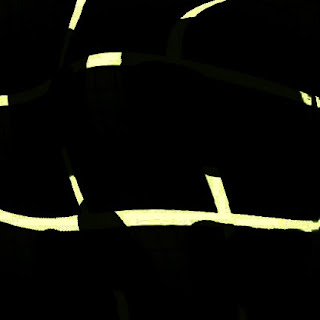 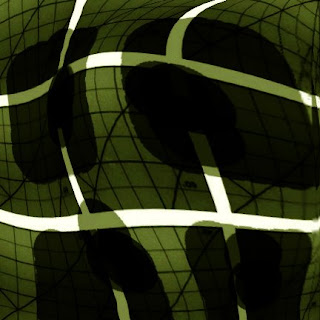 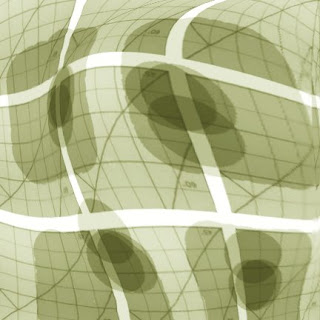 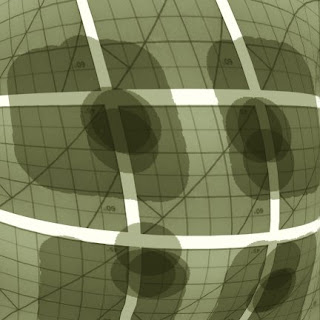 Vary color and convex. A conceptual throwback to translated grid print work several years ago. Also, note, it is relatively unimportant at this point that the grid came from the cutting matte, rather than a digitally drawn grid. In the top degradation, bounds are broken through.
Posted by wisesigh at 12:35 AM No comments: Links to this post
Labels: art = Art?, art practice, Incubator, Think Shape, W.I.P. 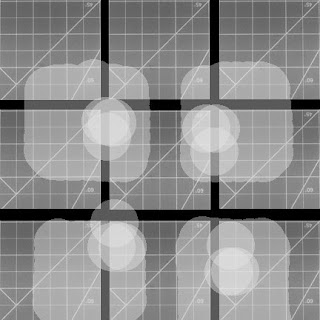 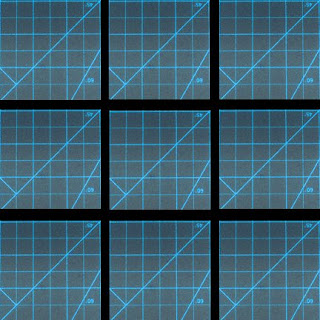 Just the cutting grid -- the transparent bounds -- without anything object/figure to be bounded within, and multiplied into a grid itself. Became too tiled.
Posted by wisesigh at 10:51 PM No comments: Links to this post
Labels: art = Art?, art practice, Incubator, W.I.P. 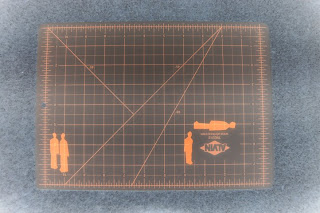 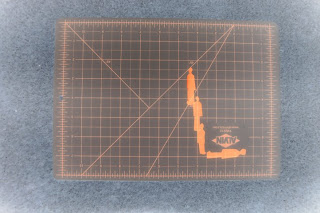 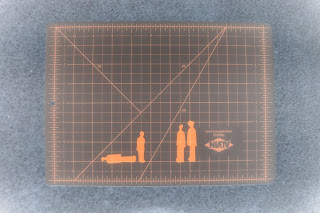 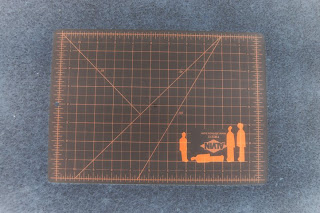 I captured these images a few weeks ago when I was playing around with placement of figures against a defined grid -- both a visual and a narrative investigation. I was drawn to the convenient grid, numerical scale, and diagonals/marked angles on the small portable cutting mat that I used to cut elements for a different project. The blue lines on white of the mat blended too closely into the blue figures, which made the images distracting and awkward, and I set the investigation aside.

After my last blog entry, I realize that part of what attracted me to using the cutting mat to place the figures was the transparent bounds that the definition of space through the grid and diagonals created for the manipulation of my figures. Tonight, I inverted the images into their negatives to heighten that transparency, and there is better distinction between the cutting mat lines and the figures.
Posted by wisesigh at 10:06 PM No comments: Links to this post
Labels: art = Art?, art practice, Incubator, W.I.P.

I went to an artist salon last night. The critic was excellent. One general thing he said sticks with me ... the importance of identifying and focusing on the core visual idea of one's artwork ... as particularly articulate and insightful.

Back to the artist statement drawing board. I end up having a difficult time with this since I feel that I can talk about my work in basic ways from more than one approach.

Drawing is the core; so, I start there when I talk about my work. It's how I approach every piece I make or consider making in the context of proposals or project ideas. But why drawing? That's a lot harder for me to answer. Some sense of touch, even if it's virtual or mental? A sense of linearity (verses solid volume), rhythm, grace?

Paradox, or acting against a rule/convention/material property is another core. Working on a 3D surface to make it 2D, working on a 2D service to make it 3D, making something hard look soft, something soft look hard, using the conventions of one media to make work in another media. I think this is motivated by interest in identity and perception.

Vacillating In-Between is also a core. I really like work to hover here, to the point where I risk criticism for not pushing in one direction or the other enough, when my urge is always to push things back to the middle, kind of like moving toward the mean in statistics.

Grounding/anchoring in some representational or iconic image, usually art historical, is also a core element of my work. I can't decide whether this is a necessary entry point into the work for me, or whether it has been what has allowed me to enter my work to date, and can now be let go or forced to fall away.

Perhaps it also helps to identify what is not at the core, at least in this moment in time.

Color. While I enjoy playing and experimenting with color relationships as an exercise of sensibilities and perception, so far color has not been a major part of most of my final pieces and projects.

Politics, social issues. Not that I don't think about politics and social issues, but I find my attempts at including any sort of visual political commentary end up too literal. So, I do not to think too directly about this kind of content, and instead, I let whatever is there in the mind infect the work. My interest in reuse of materials is partly motivated by aversion to waste.
Posted by wisesigh at 11:34 AM No comments: Links to this post
Labels: art = Art?, art practice

I guess I am not much of a blogger ... too infrequent in posting.

I went to the SOFA show this weekend at Navy Pier, Chicago. As usual with SOFA, the level of craft was high. Unfortunately, with a show this size, the work starts to blur together after a while, and I am sure I missed some pieces. Still, there were some real delights.

What an incredible amount of glass work! Too much -- and I love glass work, especially blown glass. The glass pieces that really stood out for me were the two three dimensional grids of pyrex filament -- basically drawing in three dimensions with the glass filaments. These were at Jane Sauer Gallery's booth, but I lost the name of the artist.

UPDATE: I had the chance to look at the Jane Sauer Gallery website, and I was disappointed that the pyrex forms shown there were decorative representational objects, like a chair and a basket ... to me less interesting that the 3-D grid and interrupted 3-D grid that was at SOFA. Still, I very much like the technique and commend the artist.

Outside of the glass work, Marian Bijenga's (Cervini Haas Gallery) horsehair/fabric wall hanging grids -- little spots of fabric connected by thread (fishing line?) in morphed grids -- were delightful floating spots of color. I checked them out online at the Gallery's website, and the pictures really do not do the work justice. The detail shots that show individual horsehair/fabric "spots" are okay, and in truth, each spot as a vignette was more noteworthy and intriguing than the overall arrangement of spots. Still, in person, the arrangement was much, much better than the picture on the website would reflects.

I also was drawn to crocheted metal forms by another artist (can't read her name in my notes, but the gallery was Sherry Leedy Contemporary Art) because the pieces made hard what is normally soft (hard metal in place of soft yarn).

There were some intriguing thread bare fiber pieces, intriguing more from the technique than the use of the technique. The technician in me is wondering how difficult it is to pull out so many threads and still leave enough in place, given difficulties I have had doing this with canvas.
Posted by wisesigh at 1:00 PM No comments: Links to this post
Labels: art = Art?
Newer Posts Older Posts Home
Subscribe to: Posts (Atom)